Know the rules (and where you're allowed to fly)

Master the art of flight

Understand the principles of filmmaking

Fly through your shots

In this guide, we’ll go over our top aerial drone videography training tips.

Learning to take buttery-smooth footage can take some time, as can the editing/post-production process. But stick with it and you’ll be producing professional-quality drone videos in no time.

If you’re looking to accelerate your learning, check out this Drone Cinematography Masterclass — Stewart and Alina are amazing instructors and offer one of the highest quality online training courses I’ve ever seen, not to mention their impressive drone filmmaking background and beautifully cinematic footage within the course. 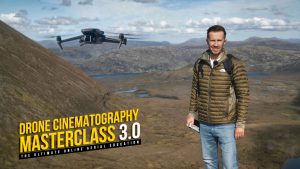 This course will teach you how to think like a filmmaker, how to elevate your post-production skills and how to set yourself apart from the competition, whether it’s in real estate, commercial filmmaking, etc.

UAV Coach readers can snag a $50 discount over here.

Alright, let’s dive into the training tips, which we’ve organized into the following chapters:

Know the rules (and where you're allowed to fly)

Here’s a directory of global drone laws, organized by U.S. state and country. For those of you in the U.S., here’s our breakdown of drone laws in the United States, and if you think you might need to get certified to fly drones for non-recreational purposes, here’s our step-by-step guide to getting an FAA Part 107 drone license.

We’d love to help you become an FAA-certified drone pilot (U.S.) — with 20,000+ online students from individual drone pilots to enterprises like Intel and GE, public safety departments, universities, and government agencies, we’re potentially the largest provider of Part 107 test prep via our self-paced online course, Drone Pilot Ground School. Our students have a 99%+ pass rate and have left 2,000+ 4- and 5-star reviews.

And if you’re looking for a safe place to fly, here’s our directory of the top places to fly your drone in more than 50 U.S. cities.

Master the art of flight

Here are a few of the training exercises our instructors do with our hands-on drone flight training students to practice manual flight proficiency:

And once you feel comfortable with the basics, try practicing some of these basic aerial drone videography shots:

As a newer drone pilot, one of the more challenging aspects of drone flight proficiency that you’d face is super slow and steady movements. Learning to move your joysticks and to tilt the gimbal at a slow and constant velocity can take some time to develop.

All this to say, when you’re practicing the shots above, try doing so as slowly and cinematically as possible.

For a number of reasons, it’s important to learn to fly your drone manually.

But it’s also important to gain mastery of your drone’s ‘Intelligent Flight Modes’ — these modes help to reduce the pilot workload and to obtain performance characteristics that might not be possible or extremely difficult in manual flight.

As an example, DJI drones offer Intelligent Flight Modes that can be extremely helpful to aerial videographers. Here are a few of our favorites:

Return-to-Home (RTH) is a great safety feature, but it’s also one of the top reasons new drone pilots crash. It’s really important to read your drone’s user manual and to understand how Return-to-Home is triggered and programmed.

When you’re flying a DJI drone, for example, RTH can be triggered in one of three ways:

And you need to understand how to set your RTH point, how dynamic RTH works, and how to pre-program your RTH altitude.

And for what it’s worth, I don’t typically like to land in RTH mode. I’ll let RTH bring the drone back to about 20-30 feet above my RTH point/landing zone, and then I’ll switch back over to manual controls to land. That can be a great thing to practice as well.

Understand the principles of filmmaking

At the end of the day, a drone is simply a tool. If you don’t know how to use the tool, you’ll be limited in how far you’re able to take your drone videography.

Learning to think like a filmmaker, from building a storyboard and repertoire of shots and understanding how they can add drama or interest to your story — that’s what will set you apart from the rest of the pack.

In Stewart and Alina’s Drone Cinematography Masterclass, you’ll be given a framework to interpret things like light and flying direction, how to handle unwanted objects in the shot, how to pick the appropriate camera motion that turns a basic shot into a story-telling masterpiece, and more.

If there’s one thing that we’ve learned from Stewart and Alina, it’s that the vast majority of drone videography and aerial cinematography coming out of Hollywood is quite simple. There might be a slight motion from the drone and maybe a subtle gimbal tilt or rotation, but the real beauty of the shot comes from tactics like:

There’s always going to be a better drone or a stronger camera. Stewart and Alina shoot most of their commercial and wedding work on cameras that cost around $1,500. You don’t need the latest and greatest system to produce professional work.

But you DO need to learn to think like a filmmaker, so start practicing!

Here’s a list of the most common drone videography shots to start honing and working into your repertoire as a professional drone cinematographer:

So you’ve been building your repertoire of different drone shots, thinking like a filmmaker, practicing your Intelligent Flight Modes and developing a strong command of your local drone laws.

When you think about planning for and completing a drone mission, there are a few different workflows to consider, usually in this order:

As you conduct more and more flight missions, you’ll get a better feel for your own processes, specifically when it comes to pre-mission planning and airspace research.

To quote the Part 107 regulations, “a remote pilot-in-command must conduct a preflight inspection to include specific aircraft and control station systems checks and to ensure the small UAS is in a condition for safe operation.”

While there’s no one catch-all pre-flight checklist that’ll work for every pilot and every drone model, hopefully, the below list helps you better understand the best practices around powering up your drone and taking to the skies.

Here’s a checklist of things to consider as part of your pre-flight ritual. Again, these are not exhaustive and might change depending on the specific model you’re operating and the type of flight missions you’re conducting.

Fly through your shots

This is a short chapter — but an important tip!

Ideally, your flight path and video recording start well before your intended shot (and end well after). This is called “flying through the shot.”

Doing so will not only offer more editing room on the front and back-end of each shot, but the pacing will help you start to think and act more like a professional filmmaker.

Shooting buttery-smooth raw footage is only half the battle. Post-production is where the real magic happens. Learning how to color correct grade your shots is one element of that.

Here’s a color grading tutorial from Stewart and Alina who teach the Drone Cinematography Masterclass that can’t recommend highly enough.

Again, if you’re looking to fast-track your post-production skills, we highly recommend enrolling in the Drone Cinematography Masterclass. In the Editing Workshop module, Stewart and Alina run through editing concepts like key-wording, favoriting, and shortcuts. And you’ll learn specific tactics like using speed ramps, key-framing, and zooming/repositioning your shots.